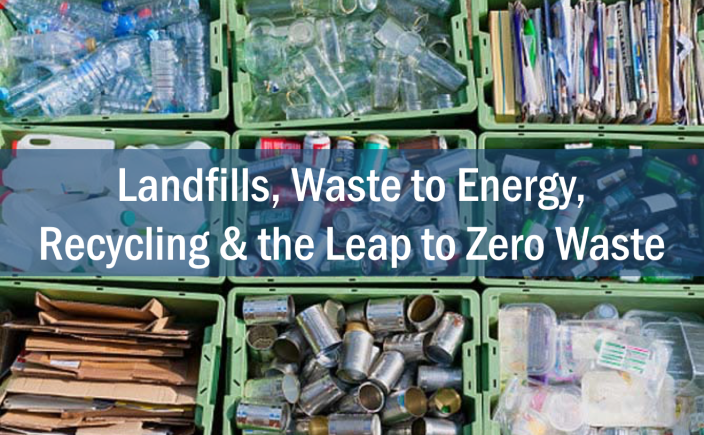 If you’re reading this, you likely consider yourself sustainability-minded, probably recycle, perhaps even compost, and may even have already adopted a zero-waste perspective. But the data suggests that most of us don’t know all that much about what happens “down stream” from our use, don’t make the connection with climate change, and haven’t ventured far in the direction of inconvenience.

Even as municipalities roll out big, single-stream recycling bins, markets for the collected commodities face ever more intense pressure. In January, China, a major consumer of post-consumer waste plastic, shut its doors. Where is the plastic going now? What happens to collected glass that finds no buyer? The significant proliferation of corrugated cardboard with the widespread penetration of Amazon deliveries is making it difficult to find a buyer for many a would-be recycler of cardboard. Some say there’s nothing wrong with landfilling and we’ll never run out of landfill space. Is that true? What’s the environmental impact of simply hauling overflowing trash from metropolitan areas to rural sites – and what are we doing to those rural sites? And is “Waste to Energy” something we should be bragging about? Do people really do Zero Waste? Here to help us navigate we welcome:

Dawn Quirk has been working for the MassDEP Municipal Waste Reduction Branch for the past 3.5 years. She spent her first year conducting Waste Ban inspections at landfills, incinerators, and transfer stations across the state. During that year, she issued close to a hundred Notices of Noncompliance and eight Administrative Consent Orders with Penalties to Massachusetts businesses and government agencies for various waste ban violations.

While working at Tufts, Dawn served as a member of Boston Recycling Coalition’s Zero Waste Task Force, a ten-month process resulting in a policy paper for Boston; Don’t Waste This Opportunity: Policy Recommendations for a Path to Zero Waste and Good Jobs for Boston. The policy paper was the precursor to a MassDEP funded grant administered by Dawn, to Toxics Action: Zero Waste Leaders’ Summit: Moving Boston to Zero Waste. The multi-year grant produced: Guiding Principles for Implementing, prepared for Mayor Marty Walsh. The Leader’s Summit and resulting Guiding Principles formed a framework for the City of Boston’s current zero-waste planning initiative.

Dawn’s began her recycling career working as a Recycling Specialist at the Cambridge Department of Public Works.

Claire Galkowski has been the Executive Director of the 15-town South Shore Recycling Cooperative since 1998. Prior to that, she worked as a microbiologist, running a teaching lab at MIT. Parenthood sparked her concern about our unsustainable waste practices.

Her volunteer work with the Boston Recycling Coalition led to a position as Boston’s Recycling Block Captain Coordinator. After moving to the suburbs she was hired by the SSRC. She served on the Board of MassRecycle for ten years, and as President for two of them.

Claire now serves on the Mass. Product Stewardship Council and the Westwood Environmental Action. She lives in Westwood with her husband and 3 cats.

Ed McGrath is the Recycling Coordinator for the Town of Bedford, MA. Ed also serves on the North Reading Recycling Committee and on the Board of Directors of MassRecycle. His career in recycling began with NYNEX Yellow Pages back around the 20th anniversary of Earth Day. Ed has worked on recycling programs and sustainability efforts in the public sector and private sector. In addition, Ed is a volunteer with the North Reading Food Pantry. Ed and his wife, Lori, still reside in North Reading. They have one son serving in the U.S. Navy and another still in college.

Kirstie Pecci is the director of the Zero Waste Project and a Senior Fellow at Conservation Law Foundation. Kirstie is a former MASSPIRG Staff Attorney actively engaged in waste reduction and opposing the expansion of landfill and incinerator capacity. Kirstie is part of the Zero Waste Boston coalition, which advocates for zero waste solutions such as reuse, recycling, redesign and composting/anaerobic digestion in the City of Boston. She also founded the central Massachusetts group Residents for Alternative Trash Solutions to oppose a regional landfill expansion in her community and promote zero waste principles. Kirstie started her legal career as an associate in Nixon Peabody’s Real Estate/Environmental Practice Group. A graduate of Boston College Law School and Harvard University, she lives in Sturbridge, Massachusetts.

Brian Balukonis retired from Raytheon Company in 2018 after a 32+ year career where he worked as the Solid Waste Process Owner for the Integrated Defense Systems (IDS) business segment in Tewksbury, MA. As the Zero Waste Subject Matter Expert (SME) for Raytheon, he focused on Zero Waste planning and helped develop a unique resource management program which lead to six MA sites achieving zero waste certification (one Platinum and five Gold). He also contributed to the establishment of the Enterprise 5-year sustainability goals that focused on zero waste and was their core environmental regulatory compliance specialist. Since 2017, he is a member of Green Building Certification Inc. (GBCI) advisory council for the Total Resource Use and Efficiency (TRUE) zero waste certification program.

Brian is a founding member of the Town of Littleton Sustainability Committee which was established in 2013. He introduced the concept of zero waste to the town by establishing the Towns first zero waste event in 2014. Based on it`s success, it is now an annual event. He has assisted and volunteered to help other towns to establish similar events. He also helped to establish a Repair Café in Littleton. He graduated in 1981 with a Bachelor’s degree in Biology from North Adams State College. He is planning to do zero waste consulting in the future.